Holidays were originally the pastime of the wealthy with rich, young people partaking in the ‘Grand Tour’ of Europe. As the nineteenth and twentieth centuries progressed however, vacations became attainable for more and more people and we begin to see the rise of the family holiday. While round-the-world cruises or European city breaks initially remained the preserve of the rich, the availability of camping and holiday park getaways, along with improved transport links, provided affordable opportunities for families to travel to new destinations and experience new activities together. 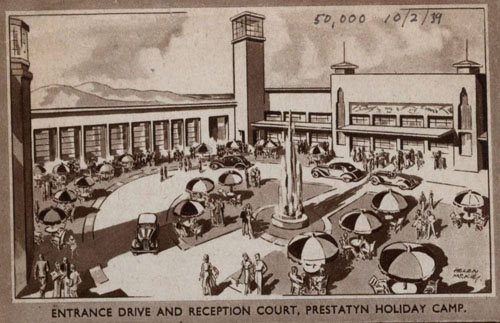 Leisure, Travel & Mass Culture: The History of Tourism provides an insight into the types of places and organisations families used to go on their holidays. For example, Prestatyn Holiday Camp (‘the Chalet Village by the Sea’), opened in North Wales on 24 June 1939. The Camp was advertised as a ‘Luxury British Holiday’, with the brochure stating that “arrangements for children are a special feature of the camp.” The camp offered modern chalets, sports rooms, swimming pools, tennis courts, croquet and “the expert guidance of a team of enthusiastic and highly efficient Sports and Social organisers”, all covered by an all-inclusive price. As with holidays of this type today, parents too could relax knowing that their children would be kept entertained.

Camping also provided an affordable holiday option and Leisure, Travel & Mass Culture: The History of Tourism includes magazines, photographs and memorabilia from the Camping and Caravanning Club Archive, dating from 1878-1990 which charts the rise of this type of affordable leisure activity. 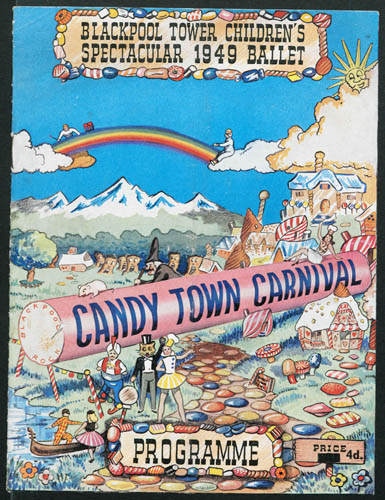 Another ever popular type of family holiday are those that take you to the seaside. The vast array of items from the Blackpool Central Library Local History Centre in Leisure, Travel & Mass Culture: The History of Tourism include guidebooks, leaflets, photographs, postcards and correspondence dating from 1789-1967. Blackpool for Sunshine, Sea & Sand from 1949 claims that “Blackpool has always been a family resort, and it is difficult to imagine a more perfect playground than the seven miles of firm golden sand, washed and purified by every tide.”

Blackpool was known for providing entertainment. In 1949, the Blackpool Tower Children’s Spectacular 1949 Ballet put on a performance called Candy Town Carnival, with dancing, singing and performances by “Venetian singers, revellers and dancers”. With its pleasure beach, zoo, circus, Winter Gardens and Illuminations, it is not hard to see why Blackpool became such a successful resort for families and children.

Other holiday trips for children involved those organised for educational purposes or time spent at holiday camps during the summer. Thomas Cook offered ‘School Journeys Abroad’; carefully planned, all-inclusive tours “full of pleasure and educational interest for students of all ages and at special reduced prices”. The tours included travel by train to several countries in Europe such as Switzerland, Austria, Norway, France and Belgium. 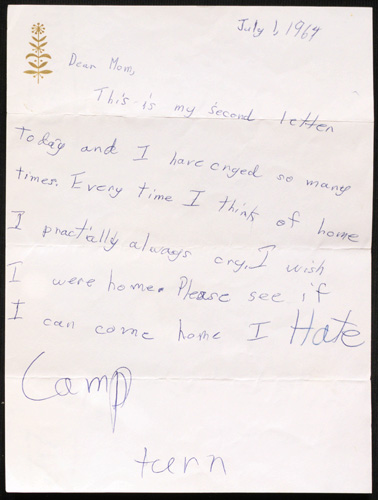 In the United States, children often went away to camp for a few weeks in the summer. Marjorie Mineberg spent time at Camp Greggmere in 1929. Her papers include photographs of her dressing up and playing with fellow campers, postcards sent back to family and programmes and notes for camp-produced musicals and theatricals. Not all children were happy about going to camp, however, as shown by the heart-breaking letters written by Minette Moore, who stayed at Camp Tonawanda in 1964. Her initial letter to her mother signs off with “See if you can arrange if I can come home I don’t like it here” and she starts her second with “I have cryed [sic] so many times ... please see if I can come home I hate camp”. By the third she declares “I might run away to a house down the street and borrow a phone and call you or a taxi to take me home”, signing off with “I am crying now”. Regardless of this emotional blackmail, her mother kept her at camp and some days later, after being horse riding, Minette had changed her opinion of camp completely, stating in one letter that “we have fun and learn lots” and reporting that she has been sailing, rowing, swimming, dancing and has had a go at archery!

Through a huge selection of material ranging from brochures, company records, travel journals and ephemera, Leisure, Travel & Mass Culture: The History of Tourism gives an insight into the types of holidays taken by families across the period, including camping, cruises, package tours, road trips and even trips to the ultimate family holiday destination, Walt Disney World!