“Leisure, Travel & Mass Culture: The History of Tourism is like the researcher's well-travelled, overstuffed suitcase of yesteryear. But instead of a jumble of notes and photocopies, the wide-ranging sources from archives around the world are neatly organized, readily accessible, and far more affordable to access.” Dr Anthony Stanonis, Queen's University, Belfast

"The history of tourism is the story of the modern world and students always relate to it whether as part of a world history survey or as a stand-alone course. This resource takes them even further into the subject, allowing encounters with previously hard to find first hand accounts of early travel, advertising, and even the records of one of the first and most important package tour companies, Thomas Cook. I always ask my undergraduates to do primary research in my tourism course, but they're limited by an inability to travel to major archives. This collection brings the archive to them." Professor Eric G. E. Zuelow, University of New England

"Much like a meticulously crafted tourist scrapbook, Leisure, Travel & Mass Culture: The History of Tourism brings together a rich collage of tourist ephemera, promotional material, visual imagery, memorabilia and tourist accounts. Unlike many other archival collections, which favor either supply side sources or individual perspectives, the array of materials made available integrate a broad spectrum of documents detailing the tourist industry as well as the tourist experience. This is a rare resource that opens up new kinds of historical evidence while providing opportunities to juxtapose and interpret historical sources in new ways. Perusing this archive is like taking a tour into history; it opens up an imaginative journey, allowing students and scholars to explore the complex interconnections between the staged tourist experience and the tourists’ response." Professor Marguerite S. Shaffer, Miami University, Ohio

Leisure, Travel & Mass Culture: The History of Tourism provides an in-depth look at the evolution of British and American working class tourism from c.1850 to 1980.

With every continent represented, the resource gives a broad overview of the destinations unlocked for the average traveller throughout this period, along with specific case studies on pivotal geographical areas, organisations, subjects and travel agencies important for the history of tourism.

Available online for the first time, material from the Thomas Cook Archives allows researchers to discover the history of the world’s oldest travel agency and chart the growth of a major pioneer of package tourism. Periodicals such as the Excursionist magazine, personal accounts from travellers on early Cook’s tours, photographs, advertising brochures, guidebooks, posters and ephemeral items provide a wealth of research material for study.

Every document has been indexed by one or more key themes for ease of navigation. This allows investigation into diverse subjects, such as:

Key locations for American and British leisure travel during this period have been highlighted. Important collections on the White Mountains and Yosemite National Park discuss wilderness travel, whilst comprehensive studies of Florida, Coney Island and Blackpool trace the development of crucial seaside resorts. Guidebooks, scrapbooks and travel journals also present the evolution of New Orleans as a key southern vacation city.

To provide context on how imperialism and Empire shaped the growth of this unique industry, guidebooks and handwritten travel journals are also included from the late eighteenth century onwards.

Highlights for each collection are explained in further detail in the Collection Highlights section below.

For further information on the development of tourism and the factors which affected it, see the Leisure, Travel & Mass Culture: The History of Tourism chronology. 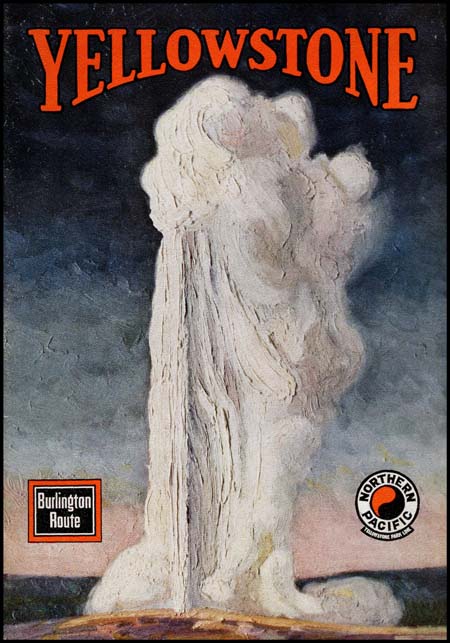 Other topics explored through Leisure, Travel & Mass Culture: The History of Tourism include:

Documents digitised in full colour from 15 archives and libraries include:

Every care and attention has been paid to preserve the historic authenticity of these documents which range widely in date from the late eighteenth century to the late twentieth century. Any terminology that may be deemed discriminatory or offensive by present-day principles may have been preserved for the historic accuracy and relevance to that particular document.

The Camping and Caravanning Club Archive 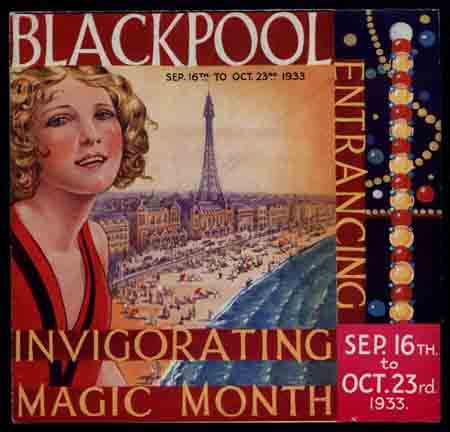 For further information about Blackpool, see the Blackpool Online Exhibition. 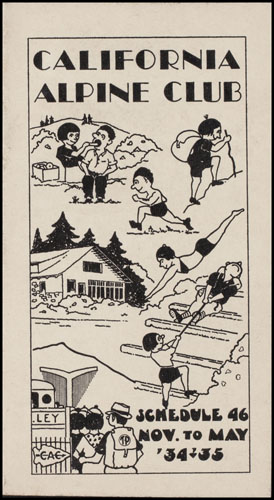 Yosemite is an iconic American tourist destination with scenic hiking trails, famous camping spots and spectacular redwood forests. Pamphlets, guidebooks, photographs and ephemera from California Historical Society provide a case study for researchers interested in wilderness tourism, conservation issues and the impact of tourism on the natural environment. Highlights include:

The Camping and Caravanning Club Archive 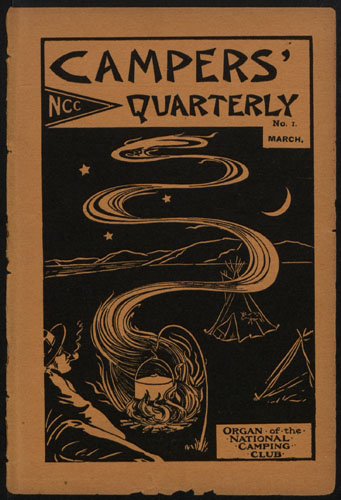 Founded by Thomas Hiram Holding in 1901, the Camping and Caravanning Club has provided expertise, advice and safe camp sites across the globe for over 100 years. It is the world’s largest and oldest camping club, with notable presidents including Sir Robert Baden-Powell and Antarctic explorer Captain Scott. Highlights include: 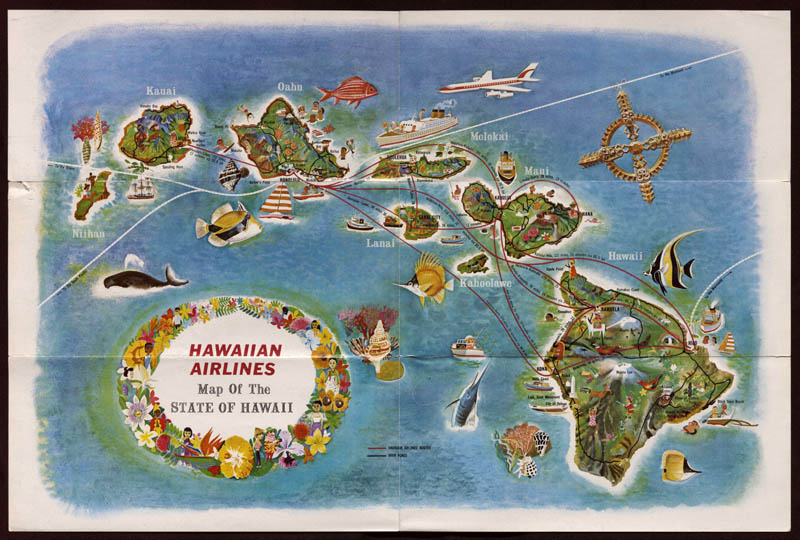 The Anspach Travel Bureau Collection of Tourism Literature spans the years 1942 to 2000, with the bulk of material dating from 1960 to 1980. The company was founded in 1932 by brothers' Herman and Robert Anspach in Highland Park, Illinois and specialised in providing upscale travel and vacations across the globe. It operates today as the Chicago-area branch of Valerie Wilson Travel, Inc.

Included in Leisure, Travel & Mass Culture: The History of Tourism are brochures, leaflets and other direct marketing materials disseminated by the Anspach Travel Bureau advertising resorts, hotels, airlines, cruise lines and other services.

The collection discusses tourist destinations spanning several decades, as well as from every continent. 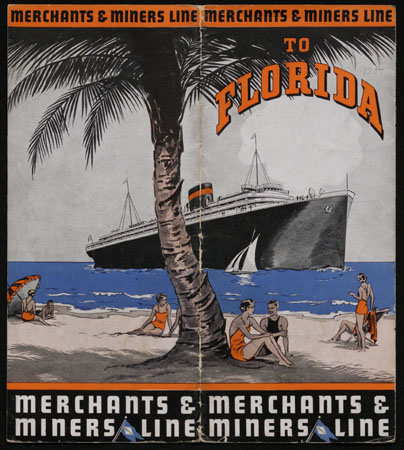 Leaflets from the Florida Ephemera Collection record the changing ways in which Florida has been marketed to tourists since the late nineteenth century and provide an extensive in-depth case study for Leisure, Travel & Mass Culture: The History of Tourism.

The emphasis shifts in the mid-twentieth century to catching ‘Winter Sun’, with coastal locations such as Miami Beach becoming popular.

Marketing also blurs the lines between tourism and settlement, actively encouraging Americans from more northern states to resettle in the area. 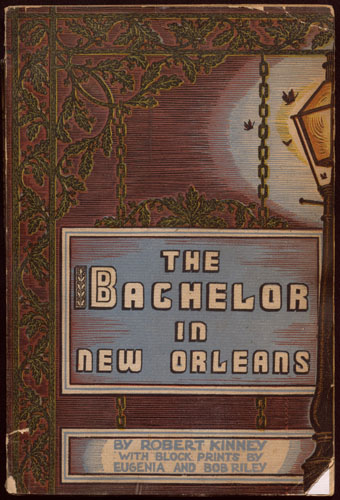 The creation of Storyville as a red-light district in 1897 also meant that New Orleans was often regarded as a rather risqué destination for young men looking for a good time.

Guidebooks, periodicals and sightseeing brochures from 1900 to c.1970 make available research material on the changing nature of tourism marketing, whilst diaries and scrapbooks from 1885 onwards provide interesting sources for studying issues of race and tourism in the American south.

Read further information on this subject in Anthony Stanonis' essay Travel Chronicles: Tourism, Memory and the Emergence of Modern America.

As transportation improved during the nineteenth century, Americans fashioned their own version of the European ‘Grand Tour’, with excursions typically taking in the Hudson River, Erie Canal, Saratoga Springs, Niagara Falls and the White Mountains in New Hampshire.

The collection sourced from Massachusetts Historical Society includes handwritten accounts of early nineteenth century leisure travel on the east coast of America and presents the authentic traveller experience along these Grand Tour routes. Highlights include: 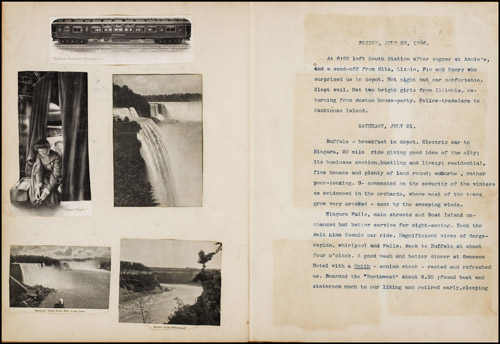 The Travel Guide and Ephemera Collection from Michigan State University spans the period 1870-1970. Leaflets, guidebooks, illustrated view books and stereographs provide an overview of tourism within the US and chart how international destinations were advertised to the American market across the period.

International in focus, the collection includes many foreign language pamphlets, including French, German, Japanese and Italian and provides examples of both German and Italian fascist propaganda from the 1930s aimed at promoting tourism under the Nazi regime and Mussolini's dictatorship. 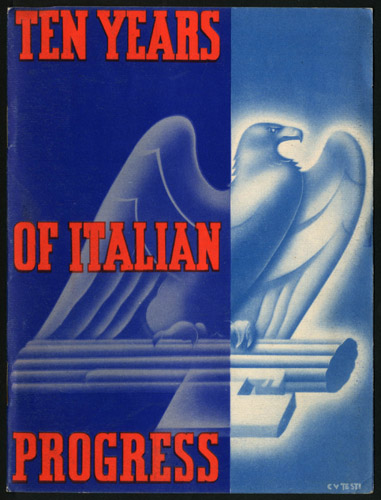 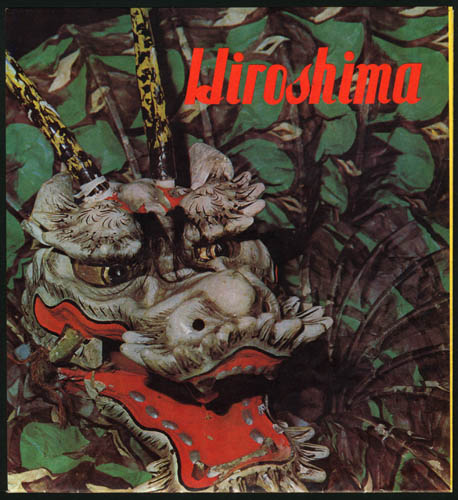 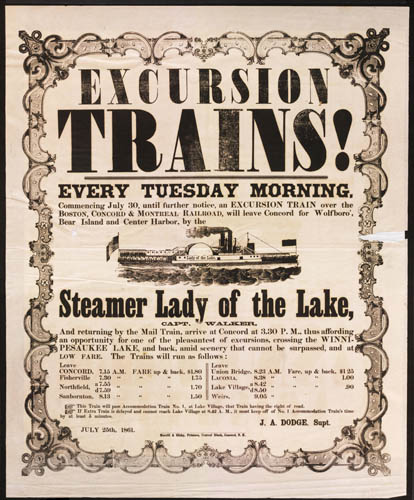 Providing an in-depth case study on the White Mountain region of New Hampshire, the material sourced from New Hampshire Historical Society offers a direct companion to collections on Yosemite and Yellowstone from California Historical Society and allows for detailed analysis of wilderness tourism and the environmental impacts of tourist activities.

The White Mountains – with the iconic Cog Railway, Old Man of the Mountain rock formation and Franconia Notch – are synonymous with late nineteenth century recreation and pleasure-seeking and represent an iconic destination for American tourists. The region is well known for its large nineteenth century pleasure palaces and retreats (Grande Dame hotels) and the selected material includes guidebooks, souvenir view books, hotel leaflets and handwritten travel journals. Highlights include:

The main focus of material sourced from the Newberry Library is domestic travel within the US by automobile and railroad. The collection includes advertising material from the Chicago, Burlington and Quincy Railroad Company Archive, Pullman Company Archive and the Conoco Travel Bureau Touraide guides produced in conjunction with Rand McNally.

International destinations are represented through guides from Raymond Whitcomb Travel and handwritten accounts, including the key Frances Wells Shaw Papers. Highlights include: 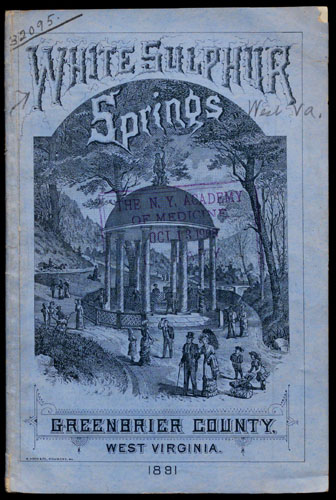 Focusing on travel for health and medical benefits during the mid- to late-nineteenth century, material sourced from the New York Academy of Medicine Library appeals directly to leisure-seeking tourists whilst advertising genuine medical services.

These new ‘Health Spas’ became key US tourist destinations and the line quickly blurred between medical necessity and popular leisure pursuit, with hydrotherapy becoming an important concept in American medicine from the 1840s onwards.

Saratoga Springs is one of the most famous of these historic American hydrotherapy resorts, with other examples including Glen Springs and White Sulphur Springs.

All the resorts selected advertise traditional activities such as golf, shooting, walking and dances alongside information on the treatments available for guests.

Available digitally for the first time, the Thomas Cook Archives is the largest contributor of material to Leisure, Travel & Mass Culture: The History of Tourism and has a very broad international appeal. The collection provides a unique opportunity to discover the history of the world’s oldest travel agency and to research how this unique organisation shaped the development of tourism history. 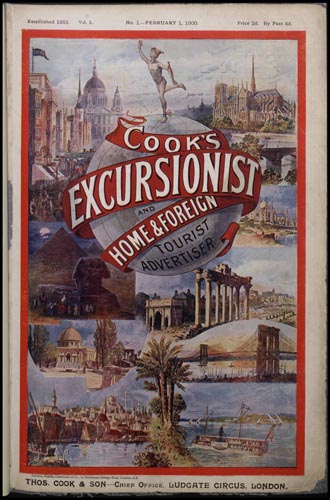 Focusing on British travel and tourism, material sourced from The National Archives, UK illustrates the involvement of the British government and British railway companies in the tourist industry.

Railway papers include agreements between travel agencies and companies, timetables, railway holiday guides and ephemera. These are supplemented by British government papers discussing ways in which the tourism industry could be influenced and expanded.

Discussions range from recording complaints received about unscrupulous travel companies to the need to encourage foreign tourists in the inter-war and post-war periods. Exempting tourists from the austerity of rationing in Britain after the Second World War is explored, along with the benefits of flood-lighting National Trust buildings and the issues of motor coach tours travelling through congested cities. 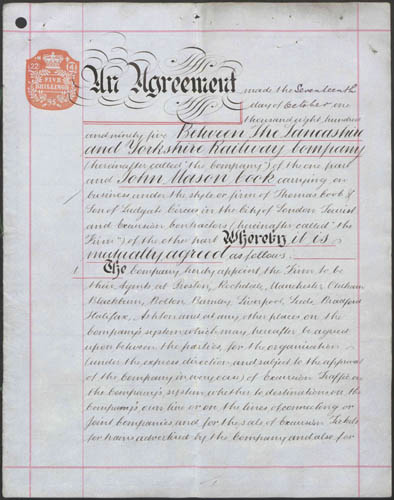 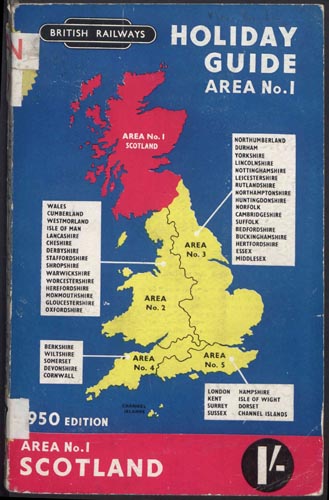 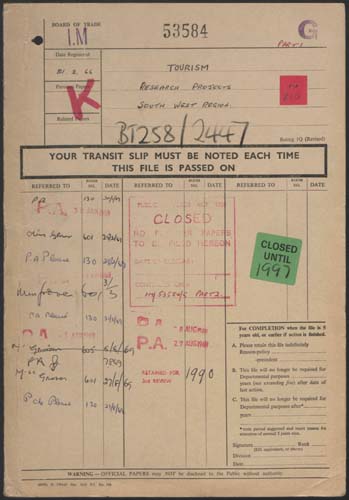 The Polytechnic Touring Association (P.T.A.) was founded in 1866 by philanthropist Quintin Hogg. It was originally established to provide students and members of the institution with educational travel in the UK and abroad, with early trips for students including Switzerland, Boulogne, Paris and Lucerne. In 1894 the organisation acquired a number of chalets by Lake Lucerne. These would become the P.T.A.’s most famous and most popular holiday destination.

The Polytechnic Touring Association became an independent company in 1911 and would later change its name to Poly Travel. In 1962, the firm merged with Henry Lunn Ltd 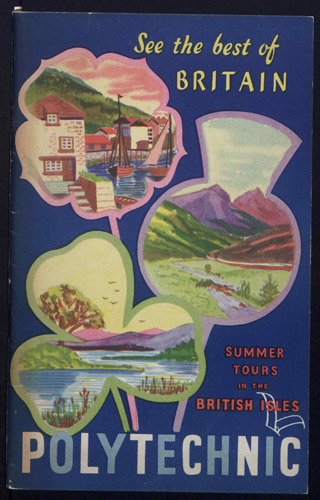 The records of the Polytechnic Touring Association, held at the University of Westminster, provide a fascinating case study for an organisation which began as a philanthropic exercise, but quickly grew to become a serious and highly successful player in the competitive tourism market in the UK. Highlights include: