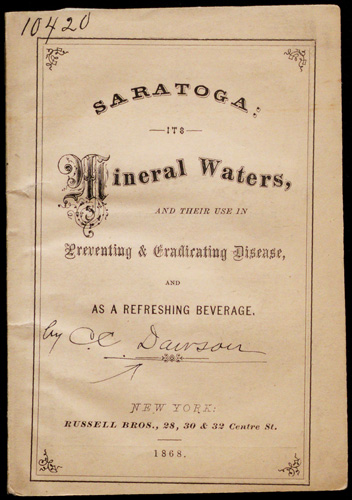 During the early nineteenth century, new medical practices such as homeopathy and hydrotherapy began to gain popularity across both Europe and the United States. Alongside this came a better understanding of the health benefits of fresh air, exercise and basic levels of hygiene; all of which were often either seriously lacking or simply unobtainable in the overcrowded, dirty cities and towns. As a result there was a shift towards taking trips to areas which could offer opportunities for all of these things. For example, in the 1820s, Saratoga Springs in New York State, became a popular destination for travellers seeking to improve their health.

Saratoga Springs (and many other similar locations) claimed that the natural mineral waters found there could cure all manner of health problems; from gout and rheumatism to gall stones, diabetes and anaemia. By the middle of the nineteenth century the mainstream press had begun to report on the health benefits of travelling to rural areas, taking heed of information previously only published in medical circles and journals. Rural retreats such as the Grand-View Sanatorium: A mountain resort for health and rest described itself as offering “the health-seeker every possible advantage ... and to those who need recuperation from over-work and exhaustion, a pleasant and home-like place of rest ... with the natural advantages of pure, dry, bracing air ... away from the noise and rush of city life.” 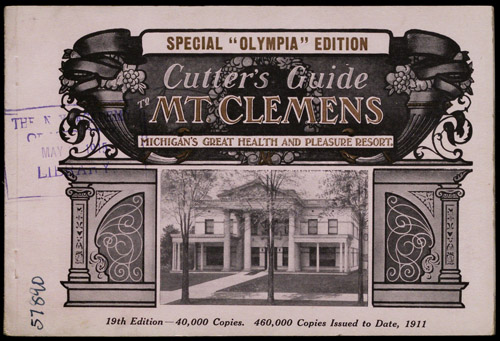 At the beginning of the nineteenth century people rarely considered taking a vacation for recreational reasons, but solely as a method of improving their health. By the end of the century, however, health resorts began to advertise themselves as a place not only to improve health but also to better the mind through programmes of recreation and self-improvement. Cumberland Gap Park in the mountains of Tennessee, for example, advertised itself as “a luxurious health resort” based on the famous European spas and composed of the Four Seasons Hotel, a casino and a Sanatorium, along with “Sulphur, Lithia and Chalybeate Springs”. While Cutter's Guide to Mt. Clemens. Michigan's Great Health and Pleasure Resort, published in 1911, states that while the resort had previously been known only for their world famous, curative mineral waters, they now additionally offer “a great variety of sports amusements” and “cater to the fancies of all classes.”

Through a wide selection of brochures, leaflets, guidebooks and travel journals taken from archives such as The New York Academy of Medicine Library, Leisure, Travel & Mass Culture: The History of Tourism charts the introduction of travelling for health reasons, initially among the wealthy, but eventually for the working classes and their families. The documents included in this collection cover destinations which claimed to have healing waters and springs through to spas, bath houses and resorts dedicated to health, recuperation and self-improvement. They provide an insight into the types of health resorts available and the differing ways they were marketed over time.