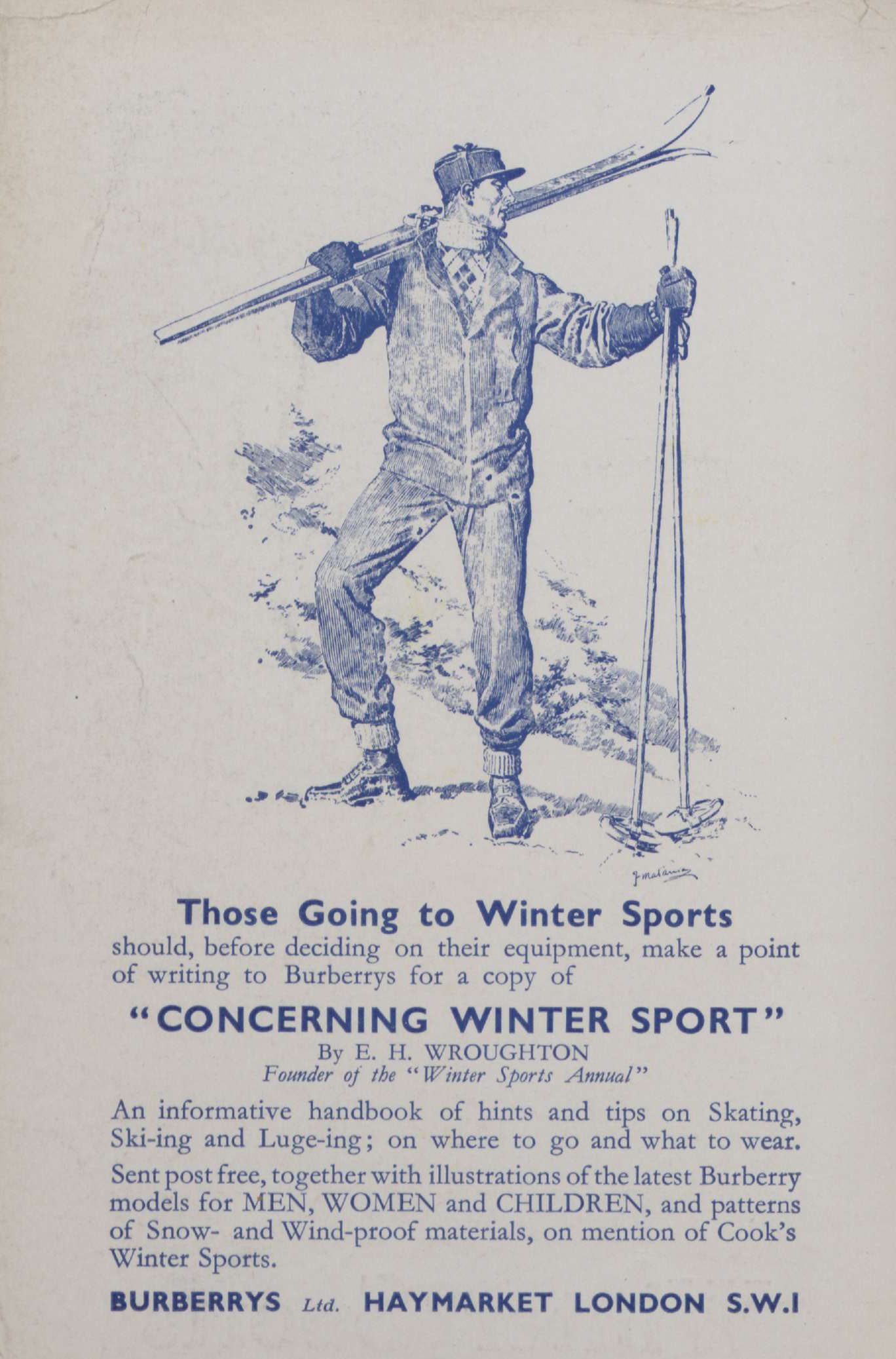 The business of tourism swiftly became an extremely profitable and beneficial one to many individuals and businesses around the world. As mass tourism became more prevalent, so did the potential for business and it was no secret that tourism was, and remains, a huge industry, as demonstrated by the rapid growth of travel agencies, the accommodation industry, entertainment, transport and commerce. Alongside this, the development of independent tourism resulted in an influx of documents dedicated to helping the intrepid tourist plan their own route. All of these aspects can be seen and explored within Leisure, Travel & Mass Culture: The History of Tourism.

Governments and businesses were quick to recognise the potential of tourists and their bulging purses. The Thomas Cook Excursionist and periodicals from the Camping and Caravanning Club featured illustrated advertisements early on from companies specialising in tourist attire and equipment. Skiing brochures, particularly featured in the Thomas Cook Archives (see Winter Sports 1963-64), included many adverts for the correct and, often most fashionable, skiing equipment to buy for trips to the Alps. Advertisements for hotels and other accommodation are also prevalent in the majority of advertising material within the collection. In turn, governments began to recognise the benefits of the developing economy around tourism and often worked towards increasing monetary flow to businesses. Collections from The National Archives, UK feature documents on the development and promotion of tourism. Amongst these is a report from the 1960s discussing the implementation of duty and tax free shops in airports (see Quarterly progress reports for Minister of State [papers relating to tourism]). The increasing commercialisation of every aspect of tourism brought money into the country and was often subsequently encouraged by the presiding government.

Whilst shops were springing up in airports and adverts were appearing in periodicals and brochures, travel agencies were working on cornering every potential market within the tourism industry. Organising the travel, accommodation and tours of their customers, many companies such as Thomas Cook and Poly Travel began to offer extras such as travel insurance, luggage transport, travellers’ cheques and currency exchange. In 1874 Thomas Cook issued circular notes that functioned as travellers’ cheques for customers and, between the 1950s and 1960s, these became the most popular form of currency used by tourists in foreign countries. In conjunction with this was the growing spread of currency exchange offices, with travel agencies effectively acting as banks for their customers. 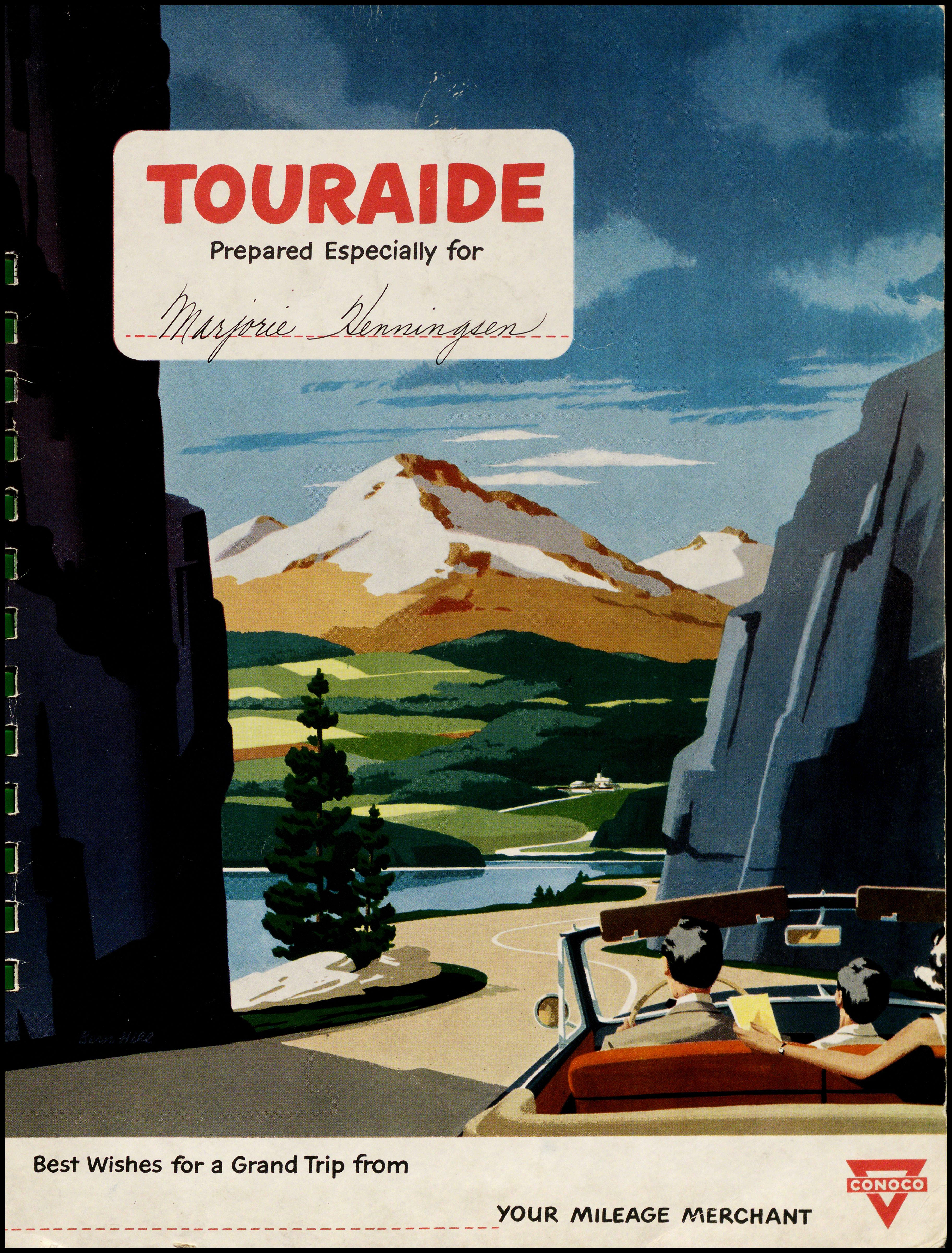 s worked to provide services for every aspect of their customers’ holidays, other businesses developed to help tourists plan their own independent travel. As transport and transport routes were developed, an increasing number of households in Europe, the UK and North America found themselves in possession of a personal motor car; road maps and detailed timetables therefore became essential features of a planned trip. The Business of Travel directoy features not only biographies of travel agencies but also of companies that specialised in producing literature for independent travel. In particular, the Conoco Travel Bureau’s Touraide publications were especially helpful to the intrepid adventurer of the open road. Touraides were personalised travel companions created especially for each individual road trip and included road maps, tips on the best route (with the Conoco gas stations helpfully pin pointed), recommendations for accommodation, mileage charts and recommended sightseeing spots along the route. If an individual could not afford, or did not want this personalised book, there were plenty of other things they could purchase to create their own travel companion. Consumers could buy maps covering the roads of the USA, the UK and Europe, airline maps showing the routes of aeroplanes around the world and country maps of destinations in Asia, Africa and Australasia (see the maps featured in the collection here).

For travellers who did not wish to use or did not have access to motor cars, rail and coach companies such as Greyhound published detailed timetables of their transport services, such as this Greyhound January Bus Time Table, so customers could strategically plan their own route. Armed with a guidebook, a map and a timetable, the individual could strike out into the world alone and, as evidenced by travel journals such as the one written by Jeanelle Landstrom’s Aunt Celle recording their road trips around the United States, many took this opportunity and ran with it.