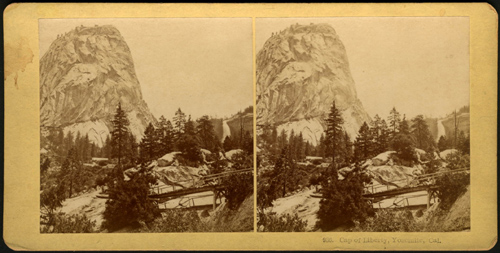 Leisure travel and the natural world have long gone hand-in-hand. As the opportunities to travel for pleasure became more widespread and affordable from the mid-nineteenth century onwards, people increasingly indulged in ‘wilderness travel’, often camping out with friends or joining organised tours to experience the unspoilt scenery so at odds with industrial expansion. Newly designated US national parks such as Yosemite, Yellowstone and the White Mountains region drew large numbers of sightseers towards the end of the nineteenth century eager to experience the outdoors for themselves. The expansion of railroad networks at this time also helped to cement this pursuit as a popular way to spend leisure time.

Leisure, Travel & Mass Culture: The History of Tourism includes two distinct case studies on wilderness travel; Yosemite and the White Mountains of New Hampshire. Guidebooks, leaflets and brochures for Yosemite can be found in the documents sourced from California Historical Society. Included are early accounts of visiting parties such as Arcadia and the Lions' Den. Camping Party to Yosemite, June, 1886 and pictorial view books; Nelsons' Pictorial Guide-books. The Yosemite Valley, and the Mammoth Trees and Geysers of California. Eyewitness travel journals and scrapbooks, including Three Hoboes in Yosemite, also offer personal perspectives on wilderness travel in this area and the environmental concerns which went with it. The collection also includes schedules from the California Alpine Club. Founded in 1913 by members of the San Francisco YMCA, the seasonal calendars allow researchers to chart how trips and destinations within Yosemite changed, including the modes of transport used.

The White Mountain region of New Hampshire was another major draw for families and individuals keen to experience spectacular natural scenery. Letters, travel journals, brochures and photographs from New Hampshire Historical Society bring the area to life, offering information on rail excursions (including the famous cog railway), landmarks such as Mount Washington and Franconia Notch and prominent guest houses. Correspondence from the Stone Family give detailed accounts of one woman’s pursuit of capturing the beauty around her on paper, whilst issues from the Bethlehem Outlook periodical provide details of accommodation and news stories from the area.

Documents showcasing the ‘Burlington Route’ (Chicago, Burlington and Quincy Railroad) from The Newberry Library show the importance of the railroad network to wilderness travel and the popularity of Yellowstone National Park. The Cody Road into Yellowstone Park and Burlington Vacation Guide, to name but a few, show the routes on offer and include various escorted tours through the region (see also Escorted Tours Through Yellowstone). 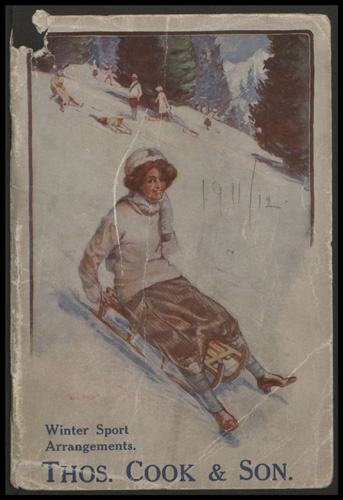 In Britain, the Camping and Caravanning Club, created in 1901 by Thomas Hiram Holding, sought to capitalise on the new found love of the bicycle to provide safe, designated camp sites across the UK (and later throughout Europe) for cycling and camping. Runs of the club magazine, including Cycle Camping and Camping offer helpful advice and tips and humorous tales from club members. This is supplemented by The Camper’s Handbook, published by Holding in 1908, which offers advice on all aspects of this new type of holiday including tents, food, camping dress for ladies and toilets. Four films, including the silent comedy With Tent and Rucksack. The Two “Novice Campers” (1938) also reveal how camping was promoted by the club.

Hiking and camping are not the only forms of outdoor activities found within this theme. Winter sports (skiing in particular), remain a draw for holidaymakers across the world and are well-represented here. Brochures from the Thomas Cook Archives and Polytechnic Touring Association provide details of seasonal package tours catering specifically for winter sport enthusiasts. Popularity was at its strongest during the 1950s and 1960s, however early examples such as this Swiss Winter Sport Arrangements. Thomas Cook & Son show that ski resorts were already beginning to take off by 1911, helped no doubt by Thomas Cook’s reputation for European tours and the popularity of Alpine excursions at the time.