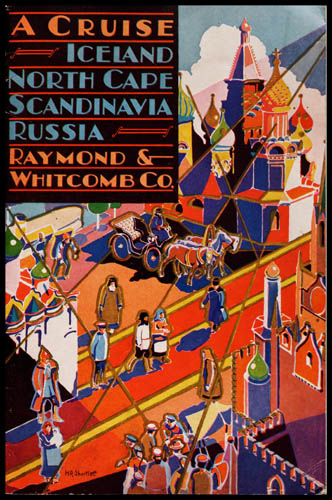 The package tour is commonly considered the ‘easy’ way to holiday. After all, many package deals not only organise transport and accommodation, but also food, drink and planned excursions, all paid for up front before travelling. This not only enables people to plan and budget for their entire holiday before leaving home, but also makes the experience of venturing somewhere completely different feel much safer, especially for the inexperienced or lone traveller.

Through brochures, guidebooks, leaflets, postcards, maps, correspondence, photographs and travel journals, Leisure, Travel & Mass Culture: The History of Tourism charts the evolution of this type of holiday; ranging from early trips through Yellowstone National Park or to Niagara Falls via horse and carriage, railroad journeys across the American states, cruise liners venturing to Europe and Asia, coach tours and excursions, flights to distant destinations and all out round-the-world trips. Destinations visited during package tours contained within this collection span across every continent including an all-inclusive cruise on the M.S. Lindblad Explorer to Antarctica!

Leisure, Travel & Mass Culture: The History of Tourism makes available selections from the Thomas Cook Archives in a digital format for the first time. A household name in the package holiday business, Thomas Cook is the world’s oldest travel agency. Material included in this collection covers the years 1845-1969 and is made up of brochures, guidebooks, posters, manuscript travel journals, promotional films advertising coach tours around Europe, for example Europe Through your Window, and periodicals such as The Excursionist (1851-1902). Other travel agencies in the collection include the Polytechnic Touring Association (P.T.A.), later known as Lunn Poly and Boston-based Raymond Whitcomb Travel, who organised tours across America and in later years offered cruises to Russia, Scandinavia and across the world.

From the late nineteenth century, the Pullman Company began to offer all-inclusive trips on their luxury trains across America. In 1931, Pullman were advertising tickets which “covered a journey exceeding 300 miles, commanded services on eight railroads … and provided facilities equal to a first class hotel”. The trains included private cabins, or ‘sections’ which were seating areas by day, but transformed into bedrooms by night (with the aid of helpful staff should you desire) as well as first class dining and even a shoe shining service! One of the main advantages of this kind of package tour was the ability to keep travelling even while you were asleep, something not possible in a car, allowing passengers to travel further distances and visit more destinations. Meanwhile Burlington Route, (along the Chicago, Burlington and Quincy Railroad) also advertised Escorted Tours – Vacations without a Care to destinations across America such as Yellowstone, Glacier Park, the Rockies, the Pacific Northwest, California and Alaska.

Also well represented in Leisure, Travel & Mass Culture: The History of Tourism are the cruise liner companies who have transported thousands of people a year across the world for both business and pleasure since the nineteenth century. Some names are still recognisable today, such as the Cunard/Cunard White Star Line, creators of the first steel liner to have electric lighting throughout and owners of Blue Riband winners Lusitania and Mauretania. From the late nineteenth century the cruise liner business was booming around the world, with Fabre Line taking people to the Mediterranean, German Atlantic Line sailing for South America, Norwegian-America Line expanding their destinations to include Africa and Southern Cross Cruises providing excursions across the Philippines. Pamphlets from these companies, and more, can be found in the papers of Frances Shaw from The Newberry Library.